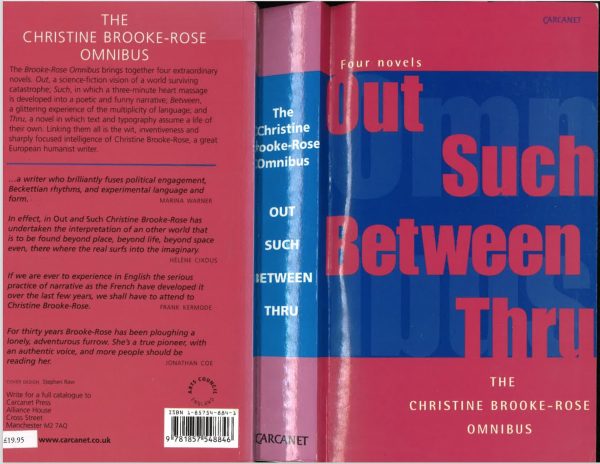 Christine Brooke-Rose’s Thru was published in 1975; she was working in Paris, and judging by he range of references in the novel she would have known Barthes and many people in literary, linguistic, and philological circles. The longest review of Thru, Emma Kafalenos’s “Textasy” (International Fiction Review, no. 1, 1980, online as a pdf) makes the point that Brooke-Rose’s novel can be read as a demonstration of several ideas then current in narrative theory, especially the “floating ‘I’,” first used by Robbe-Grillet in La Maison de rendez-vous (1966), and theorized by Bruce Morrissette in The Novels of Robbe-Grillet, which appeared the same year as Thru.

The novel is about as academic as novels can get. Here are some of the hundreds of the casual multilingual references: hene kai nea (one of Hekate’s festivals), Maud Gonne, quipu, dompna soisebuda (Provencal for the Tuscan “donna ideale,” a woman comprised of ideal parts of several women), actants, the Fort-Da game, Luce Irigaray, Hegel on becoming, Clarissa, Pamela, Chinese xian, the Abbe Bouhours, La Princesse de Clèves (as an example of a naive narrator), Eurylochus (Odysseus’s friend, the coward).

Many theorists and writers are listed on p. 623 of the Brooke-Rose omnibus edition, and the novel ends with a five-page long list of what appears to be every proper name in the book. An excerpt: 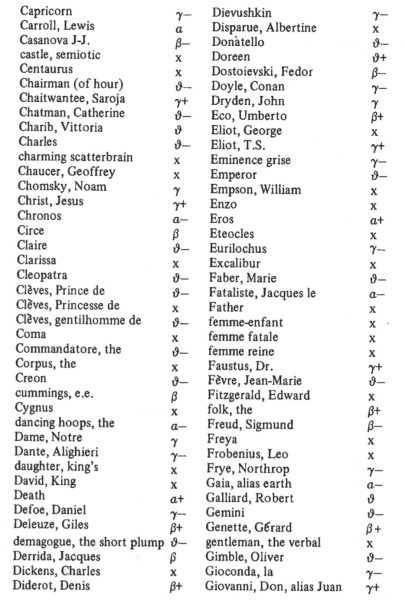 Thru takes place in and around a seminar in literary theory, in which the veracity of the narrator and the place of intentionality are continuously in question. Some passages can be read as actual lessons, or arguments made by the implied author. On p. 620, for example, a narrator poses the question:
“Supposing you had started telling a story, which digressed into another and yet another, how would you go about returning to the first unfinished story?”
This question is the novel’s question, because it is structured as a series of disappearing and recurring narratives by overlapping or indeterminate narrators. On the next page, there’s a passage that sounds like Brooke-Rose’s own idea:
“…the vulgar desire to know should be kept warmly floating in [the reader’s] mind. He must not be allowed to forget the hero or whatever the initial subject was.” (p. 621)
On the next page this is cemented as the implied author’s position:
“The two pleasures, the pleasure in your game and the curiosity, should be skillfully balanced which is the work of a lifetime.”
Thru is successful in these terms: it meditates on these issues, and tries to enact them at the same time. In that sense it’s a successful metafiction, and very much of its time and place in its range of devices: passages lifted from other authors, portmanteau words, allusions casually assumed, bright dialogue (a funny passage on whether wristwatches should be worn during sex), and ponderous lectures (including handwritten comments by the instructor).
I didn’t read the book for any of this, but for its innovative typography. About a quarter of its pages involve the kinds of formal arrangements that were possible in 1975: concrete poems (rows and columns of text blocks to illustrate tables in a classroom, p. 582): 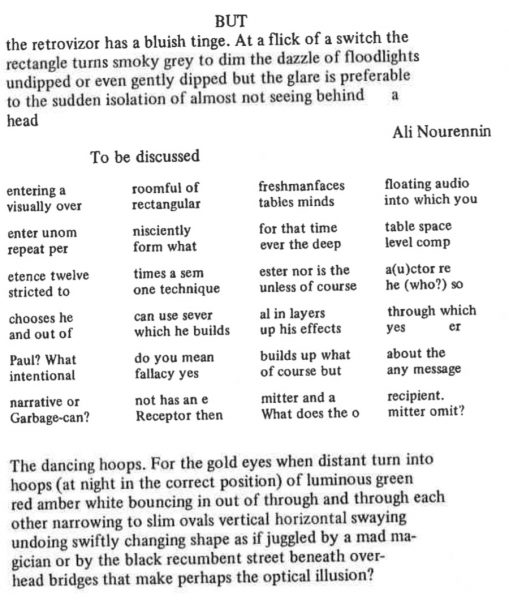 mesostics with text scattered across the page and boldface letters that read down): 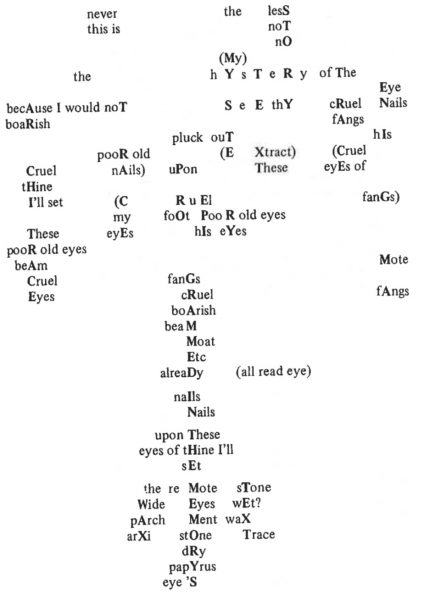 diagrams (mainly inspired by Lacan’s chiastic diagram of self and other, but also by semiotic squares): 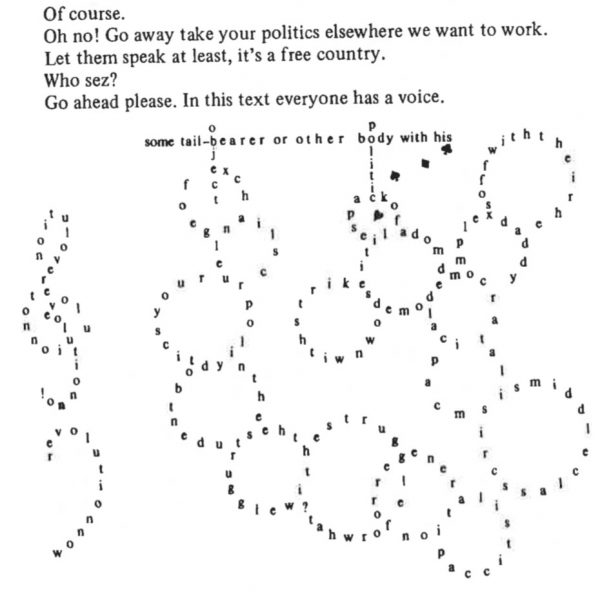 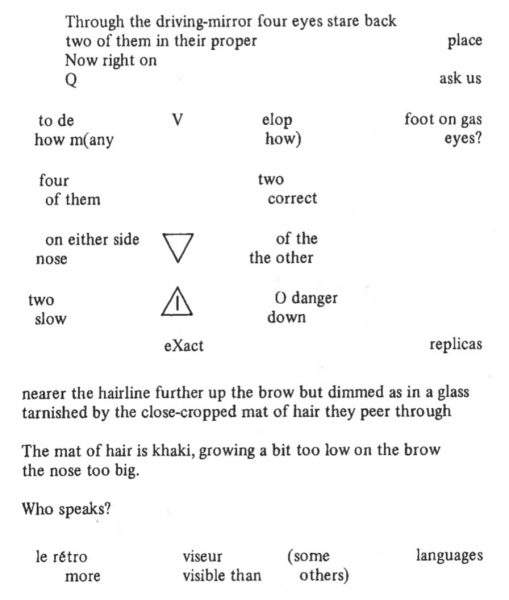 The first paragraph nearly mimics the rectangle of a car’s rearview mirror, and then it provides an inverted triangle for a nose and a “caution” road sign — all of which figure throughout “Thru.” The book ends with a partial repetition of these elements: 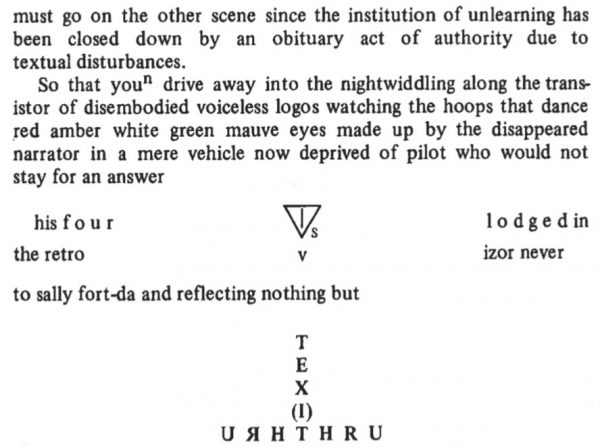 At first some of the pages with scattered lines and fragments are reminiscent of William Carlos Williams, Apollinaire, or ee cummings, but the two apposite points of reference are Pound (in the 1980s, Brooke-Rose was known mainly as a scholar of Pound) and Maurice Roche (died 1997), who is not widely read now, but was one of the first experimental novelists of the postwar generation to use graphics and found text, for example in “Compact” (1966).
The question that concerns me is whether Brooke-Rose’s innovations in layout are thematically justified. Experiments with formatting aren’t found in the principal theorists that Brooke-Rose was reading, so I assume she was thinking more of Pound or Roche than Barthes or Blanchot.
In my reading almost none of the typographic experiments are closely or clearly related to concerns voiced in the text. The opening page, with its concrete poetry and its graphic elements, serves to introduce the idea of chiasmatic seeing, and the doubled reflection in the anti-glare mirror serves as an emblem of the two narrators, Armel and Larissa, who are each other’s doubles. It returns on the novel’s last page, making the entire novel a reflection of mirrors.
On p. 691, the self is visually deconstructed into
u                      a  l  i  t  y
rea
l
i                                    o
t
y               o                  u
which connects with meditations in the surrounding text. But most of the typographic innovations are disconnected from the book’s themes.
The pages with interesting typography do constrain reading in many ways, and a lot could be said about the violence done to the usual modes of reading, and its possible links to the themes of multiply divided selves. But those would be imposed readings, because in my reading such links aren’t thematized or developed.
I wonder if Brooke-Rose sensed the disconnect between her favorite theories, on the one hand, and some of her favorite authors, like Pound, on the other. I don’t think she ever returned to this sort of experimentation.