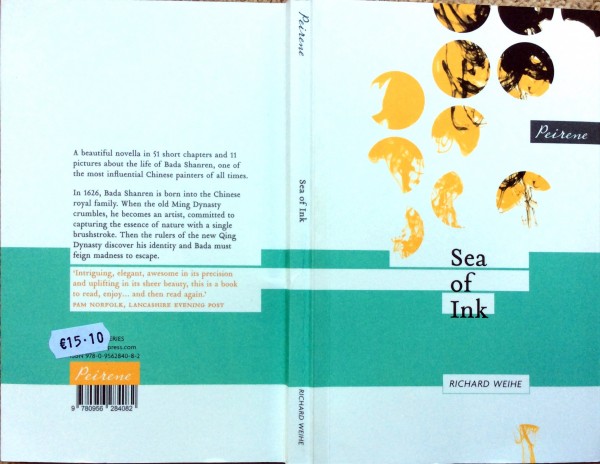 Sea of Ink is a novel about the 18th century Chinese painter Zhu Da. It is illustrated with 11 of his paintings, which are described with a precision unusual and possibly unique in fiction.

A note about the book’s presentation of history before I consider the images. Weihe was careful to read many of the major sources on Zhu Da, including Richard Barnhart’s catalog (1990). But the version of Zhu Da in this book is distinctly old-fashioned by art historical standards: politics is kept at a distance, and there is a lot of writing about the poetry of the brushstroke, very much like art historical writing from the mid 20th century and before. Weihe takes much of his orientation from Francois Cheng’s “Le genie du trait” (1986), and the description of the literati poet / painter’s life is commensurate with a much older literature including Binyon, Waley, and Pound. So I would not recommend this book as a contribution to the understanding of Zhu Da, or even of Chinese ink painting in general. It is of interest, I think, for the detailed engagement with images. 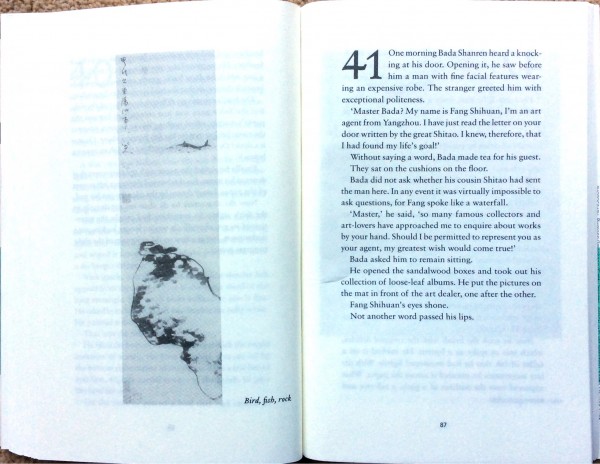 The book’s first image comes a quarter of the way through the book, so it interrupts the reading in an especially striking way. As he does with all the pictures in Sea of Ink, Weihe narrates the construction of the painting. 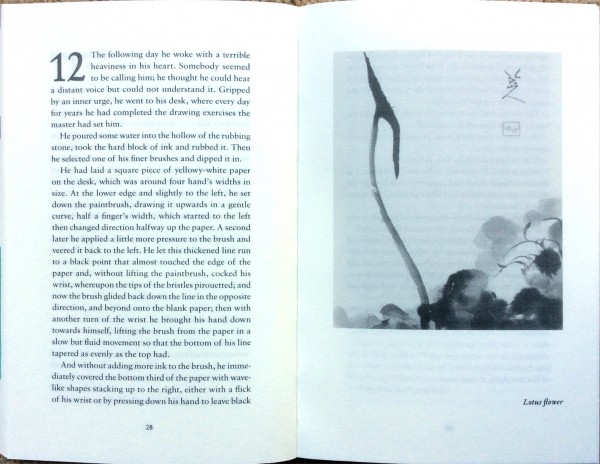 He laid a square piece of yellowy-white paper on the desk, which was around four hand’s widths in size. At the lower edge and slightly to the left, he set down the paintbrush, drawing it upwards in a gentle curve, half a finger’s width, which started to the left then changed direction halfway up the paper.

It’s remarkable to be shown a picture and told how the picture came into being, and it’s also unusual to be reminded of the original scale of the picture. The specification of the size of the brushstroke (“half a finger’s width”) has to be imagined along with the size of the paper (“four hand’s widths”) — not an easy thing to do given that the book is small, maybe 4 by 8 inches. The description continues:

A second later he applied a little more pressure to the brush and veered it back to the left. He let this thickened line run to a black point that almost touched the edge of the paper and, without lifting the paintbrush, cocked his wrist, whereupon the tips of the bristles pirouetted; and now the brush glided back down the line in the opposite direction, and beyond onto the blank paper; then with another turn of the wrist he brought his hand down towards himself, lifting the brush from the paper in a slow but fluid movement so that the bottom of his line tapered as evenly as the top had.

This is a good evocation of what it is like to paint a shape like this, even if this exact sequence might not be the one Zhu Da followed. It engages the image at a level of detail that is unequaled, I think, in other novels with images. As a strategy it has clear limitations: Weihe cannot describe the rest of this painting in equivalent detail, even though the description continues onto the next page, because the brushstrokes at the bottom of the painting are blurred and indistinct.

In other cases he has little to say about the image. Of Landscape with Hut (below) he says only that

He took the brush with the cropped bristles. He turned it several times in the ink and guided it down the length of the still-moist paper, now using just the side, now pressing it down like a scrubbing brush, twisting it slightly before lifting the brush at the bottom of the paper. He thus painted a succession of column-like light and dark grey shapes which blended fluidly into one another as the damp paper dissolved the contours. 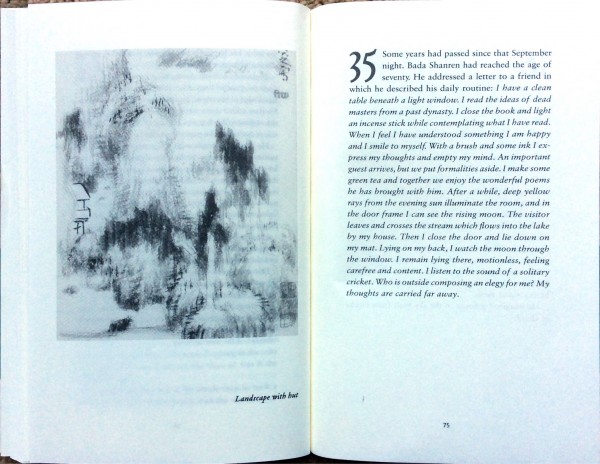 This sort of description is more an account of process, without specific reference to the image. In this case it does not matter that the description is on the page before the painting, so a reader cannot easily correlate text and image. The same happens in the majority of the eleven illustrations in Sea of Ink. The account of the first illustration, for example, continues:

And without adding more ink to the brush, he immediately covered the bottom third of the paper with wave-like shapes stacking up to the right, either with a flick of his wrist or by pressing down his hand to leave black streaks which came out darker or lighter depending on the pressure.

The ekphrases in Sea of Ink are poised between exact accounts of individual marks, to be imagined inch by inch as they are made, and general evocations of the gestalt or feel of passages or paintings. The second kind of passage forms a bridge to the book’s more philosophic preoccupations with loneliness and meditation. It’s an interesting experiment that could potentially be taken much farther: the line-by-line descriptions could be even more myopic, more insistent on deixis and process, more technical (Weihe only glances at the Chinese literature on ink painting processes). The intermediate passages, which evoke whole paintings, could present more problematic mixtures of the painter’s gestures and the viewer’s ways of looking; and the pages between images, which are mainly not about visual objects, could be infected by details of the visual. The book, in short, could become much stranger and more intense, and still retain its themes of separation, monastic life, and emptiness. 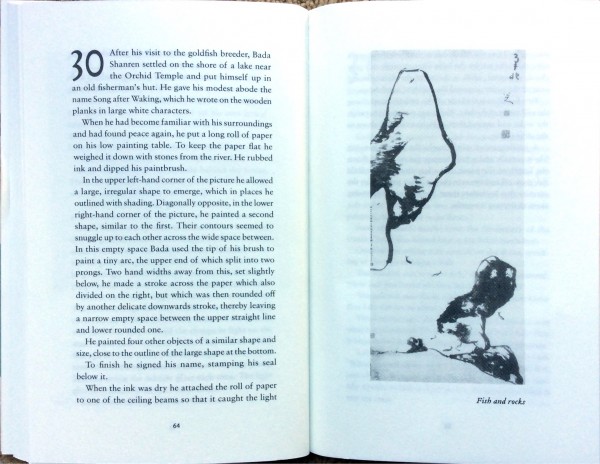