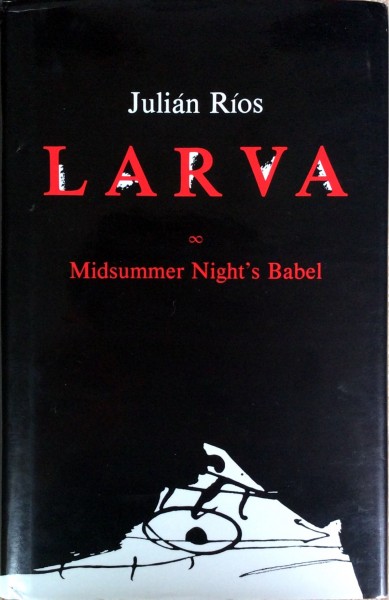 1. Format of the book

Julián Ríos’s book Larva: Midsummer Night’s Babel (1983, English translation 1991) is a 585-page experimental novel with a chapter of photographs, and graphics scattered throughout the text. The table of contents lists eight named chapters or sections, one with five named sub-sections. 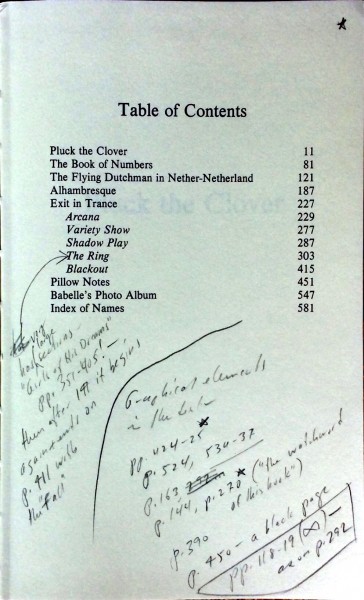 It’s the last two that are odd: the penultimate section is “Babelle’s Photo Album,” which is 34 pages of photos of London, in alphabetical order according to location, preceded by a color fold-out map of Fulham and Chelsea. The final section is an “Index of Names” — proper names cited in the book.

The third-to-last section is “Pillow Notes,” a series of end notes comprising an independent story about wandering through London. Every other section or chapter, 450 pages of material, is arranged as text on right-facing pages and footnotes on left-facing pages. 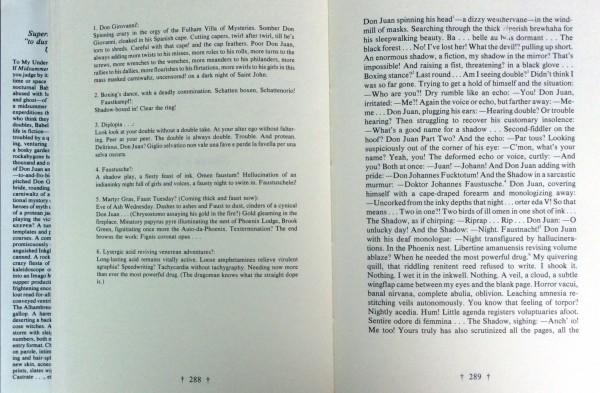 In this way a reader turns each page and reads the right-facing page, sometimes pausing to consult the footnotes on the left, and occasionally turning to the end notes in the “Pillow Notes” section. 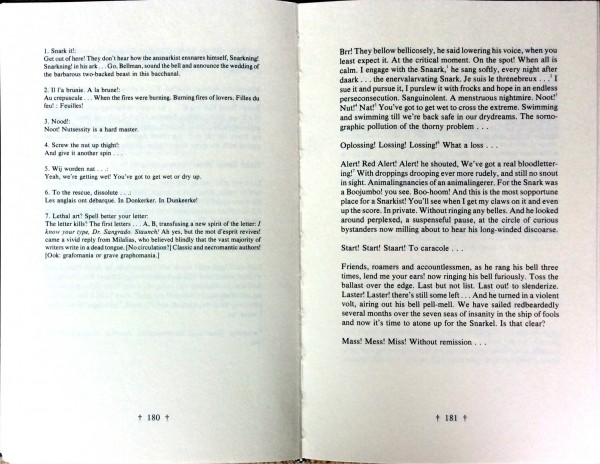 The organization is clearly experimental. So is the language, which is full of puns and portmanteau words that must have been difficult to translate. (The book was translated by Richard Francis, Suzanne Levine, and the author, and it won a translation prize.) The precedents for Ríos’s wordplay are Arno Schmidt and Finnegans Wake. I’ll say more about that below.

Here I focus on the photographs in “Babelle’s Photo Album,” and the graphical elements in the body of the book. They are, I think, far less experimental and less interesting than the text, except for the simple fact of their presence in the book.

The book is determinedly unserious and consistently lascivious and over-sexed. It is stuffed with every simple pun the author could imagine. “Pots and puns! and lick ’em all clean,” he writes on p. 139. The wordplay is mainly sexual, and sometimes literary. To me, the puns are compulsive, not funny, and seldom engaging. When they are at their most inventive, they can be reminiscent of Finnegans Wake, for example on pp. 151-3 where short paragraphs play on multilingual near-rhymes: “Back! Bak! Vade retro, bakuninlinguist”; “Slaap! Sleep! Sloop! Pillow talk”; “Raaskallen! Rusk a la carte, rascals…” and so forth.

To my ear there are few such passages. A chunk of prose on p. 363 reads like an attempt to emulate Finnegans Wake, and there are other examples. On p. 413 there’s a long word, which is an onomatopoeic scream in a dozen languages:

This is an echo of the long word for Humpty Dumpty’s fall in Finnegans Wake, and the “scream” comes at a crux in the book, after Ríos has spent a full 60 pages listing all the women his narrator has known (This happens in an unnamed subsection of a subsection of the book — a fact that signals how “random” the table of contents is in some respects.) After the “Scream” comes a new section, “Blackout.”

The majority of the book is not especially sensitive to verbal strategies other than puns, homonyms, and rhymes, and the prose seldom rewards a close re-reading. In Finnegans Wake, a close reading can reveal layers of meaning pertinent to the narrative: here, it usually only reveals a kind of stream-of-consciousness multilingualism. A more proximate model here is Arno Schmidt, who was also beset by relentless lasciviousness (and sexism), and who also loved drama, theater, and breathless expositions.

There are a half-dozen exceptions to the Larva’s doctrinaire unseriousness, and they stand out oddly. On p. 25 there’s a paragraph about a woman beaten by “a psychopathic Sikh” until she is “almost unrecognizable.” These serious passages come and go without motivation, and the effect is that the author seems insouciant and irresponsible about his own material — and also afraid of being serious, even while he is wildly ambitious as a novelist.

As in Finnegans Wake, there are metafictional references to the book itself, which rehearse different possible meanings and justifications for Larva. On p. 30, a footnote on “volume voluminous!” calls the book a “paraodyssey,” and says of the author (in the third person) that “his graphomanionanism” was “living the written,” which sounds to me at once vague and self-aggrandizing. Page 434 has a better version of the book, calling it a “black novel.”

As an approximation, I would describe this book as an attempt to write alongside Arno Schmidt, and perhaps even for a while along with Joyce, and to do so by being as carefree, obscene, fragmented, random, and compulsive with language, plot, sense, and narrative as possible. In theory that could have produced a good result, and the book’s formatting (left-facing footnotes, end notes, photographs) is promising, but the result is both intentionally and unintentionally tiring.

3. Images in the book other than the photo album

Aside from “Babelle’s Photo Album” there are about two dozen graphics in the book. Most are isolated: there’s “the watchword for this book,” a kind of sigil, on p. 270: 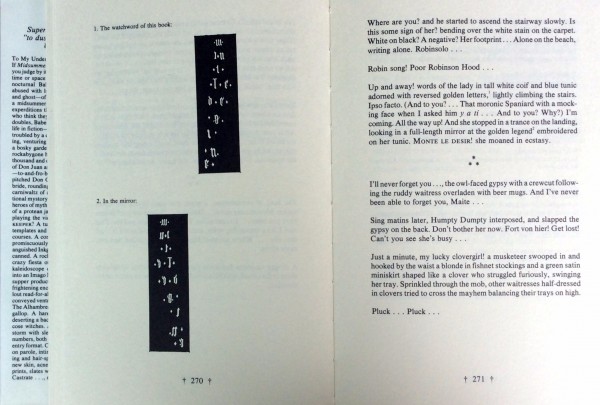 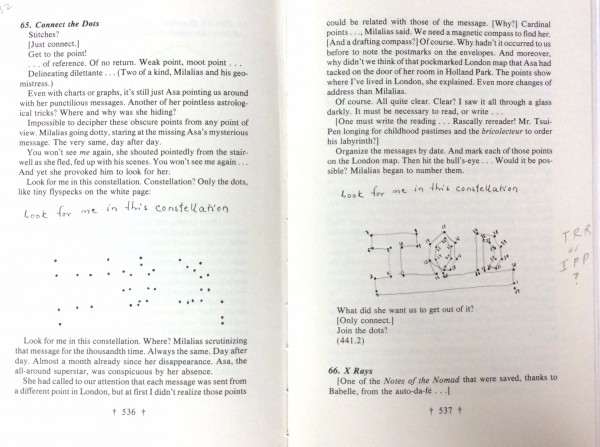 The only other graphic that might have some significance is an infinity sign, repeated twice (pp. 118-9, and again on p. 292); it might represent “the infinity of reading.” Mainly the graphics are quickly done and not especially engaging.

The main point of interest in Larva from my point of view is the chapter of photographs. 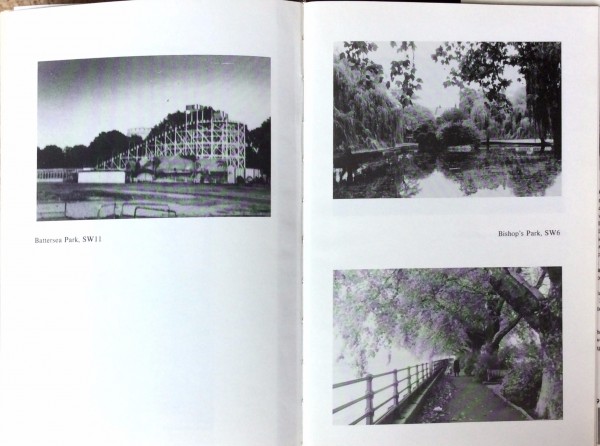 “Babelle’s Photo Album” is full of indifferent black and white photos of streets, with some photos of other things like shops, pubs, parks, and a cemetery. The pictures are about as poor — as informal, as unskilled — as they could be. By contrast the fold-out map is in color and seems large enough to be used as a reference for the entire narrative. (It turns out it can’t be used, because so many named places are not on it.)

Most references to these photos are in the section before, “Pillow Notes.” There a reader will encounter many references to streets in London, and she might start leafing ahead to see pictures of the places in the narrative. But that process is unrewarding. Many places are not in the photographs, which could be taken as a sign that the author did not expect readers to look up each street. Starting on p. 478, for example, Notting Hill Gate is not in the photographs, but Queen’s Park is, and so is Queensway and Porchester Gardens; but on the next page, Portobello isn’t, and neither is Camden Passage or Essex Road… and so forth. It seems “Babelle’s Photo Album” is intended to work like an inexact informal or reminiscence of the preceding “Pillow Notes,” in the way a tourist’s casual snapshots will be inadequate to their memories and experiences.

The 450 pages of the book before “Pillow Notes” also have some references to places in the photographs, but they are even more detached from the photo almbum. A reader won’t think of turning to the photos when she reads, in a footnote on p. 24, a reference to “the Indian shop on Shepherd’s Bush Road.” Some passages in the book mention places in the photos, but the fact is never noted. Will a reader who looks at the photograph of Blomffield Road, in the section that begins on p. 547, remember that back on p. 309 there is a reference to Blomfield Road? I don’t think so, but then I have trouble understanding why Ríos did not index the reference, since so much of the book plays with meaningless references.

Things happen on these streets, and places and times of day are named, but they are not present in the photographs. One of the very few passages that refers to a detail in a photograph is a description of a sign reading “HELP THE BLIND”: this occurs on p. 433, without a reference to the photographs, and in “Babelle’s Photo Album” there is a photo captioned “Fulham Palace Road, W6,” showing such a sign. It is not impossible that a reader would remember the reference a hundred pages earlier, but that wouldn’t make it meaningful. 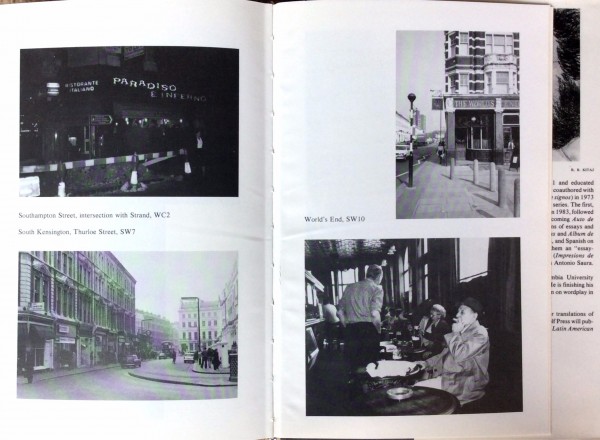 “Babelle’s Photo Album” ends with three pictures of the World’s End pub (shown above and below). I imagine I must have missed the references to it in the text. The last photograph is an exceptionally bad photo looking up at the sign, which is derived from Hogarth. (The picture is blurred on the left, apparently cropped from a low-resolution original, and overexposed.) 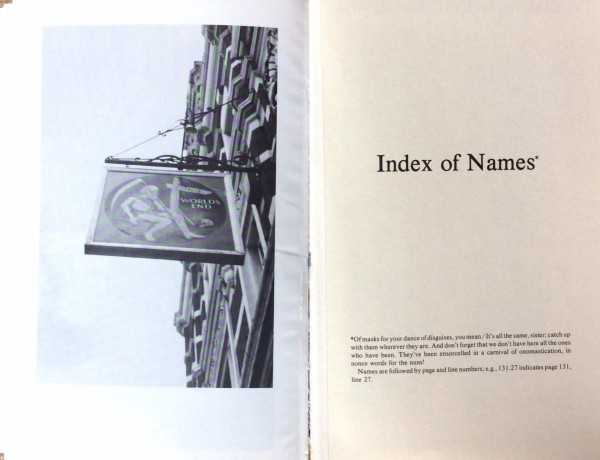 5. The Index of Names

This is the last section of the book, and a reader might at first take it as an actual index, as in a book of nonfiction. 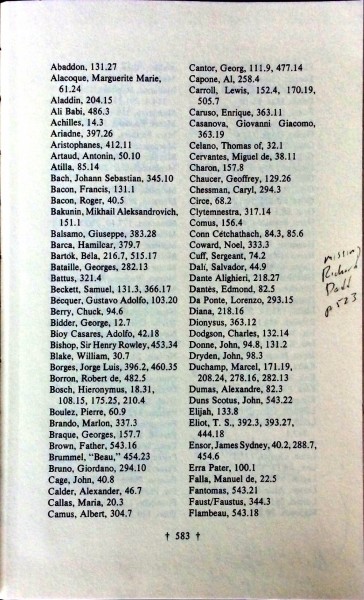 It’s a listing of proper names in the book, but it serves no purpose that I can see: the book doesn’t make a theme of names, or of these names in particular. There are some odd entries: “Legion” (as in the Devil, as in “larva”) is indexed, but the place Legion appears, on p. 69, is not really about the Devil.

There are also many proper names in the book that aren’t in the index. Nietzsche is mentioned several times (for example p. 342). Why not index him? It seems the “Index of Names” is careless, both in concept and in execution.

The album of photographs and the index have tremendous potential.

The index could become an object of interest in its own right, a kind of counter-narrative to the book, or even a sort of key to its crucial references. As it stands it doesn’t work that way, because the names are largely random, and because the listing is incomplete.

“Babelle’s Photo Album” could be a fascinating visualization of “Pillow Notes,” or of the entire novel, recasting their feverish adolescent multilingual puns into an ordinary, gray-skied walking tour of anonymous streets. But in order for it to work that way its poor photography would have to be explained, and its almost complete disconnection from the text would have to be thematized. I can also imagine a photographic album that presented exact, unexpected visual equivalents and illustrations to specific things in the text. But in this book the visual remains an inert insertion.