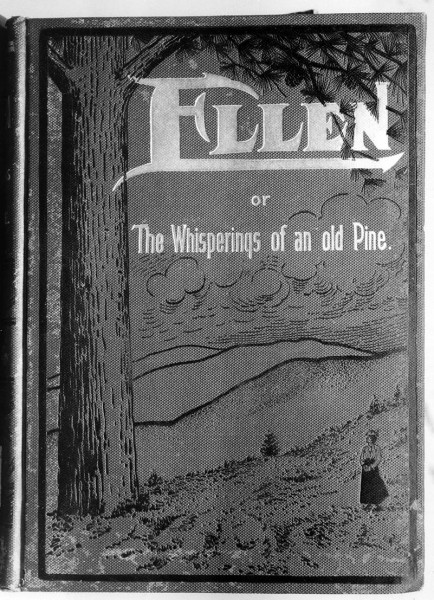 Joseph Battell’s Ellen, Or the Whisperings of an Old Pine (1903, second edition 1908) is a book I learned about from the mathematician Martin Gardner, who wrote an account of it in his book Fads and Fallacies in the Name of Science (1952). It is an exceptionally rare book, and worth finding in the original. WorldCat shows it as being in only 14 libraries worldwide. The first three images here are my photographs from an original copy of the book. The other illustrations here are from the poorly digitized version of the second edition available on the internet. There is also a scan of the first edition; but the original is beautifully printed and the images are very good quality. (Updating this, June 2015: there is a new scan of the second edition, which I haven’t had time to incorporate here yet.)

“Few odder works than Ellen have ever appeared in the United States,” Gardner says. “All three volumes are in the form of a Platonic dialogue between a sixteen-year-old girl named Ellen and the narrator who happens to be an old Vermont pine tree.”

(Stacy Wykle has informed me that Bernard Lightman’s Victorian Popularizers of Science: Designing Nature for New Audiences, 2009, p. 133, lists several books in which objects, including pine trees and pieces of coal, speak. So there’s a context for this book in well-meaning Victorian pedagogy.)

At the beginning a reader might think that the book is a pastoral allegory, perhaps along the lines of 19th century American spiritual and religious novels. Part I opens with a first–person monologue:

How did I get up here on this high mountain, do you ask? I was born here. My ancestors were here before me. It is our home, this mountain–top. They came here from the valley below, I suppose,—at least the greater part of our family have always dwelt in the valleys. But those that came upon the mountains found the soil deep and strong, and thrived on it, and I grew up with the rest of them, only a little nearer to these rocks. And as the years went by I have become stronger and taller, until now I am the largest of all the pines upon this mountain. And thus I stand up here winter and summer, my heavy branches covered the year round with myriads of green leaves, keeping watch, not only over the mountains, but over the valleys which lie at ether side of me… [p. 1]

The old Pine observes the gradual changes in the landscape, the coming of the Indian canoes, “the batteaux of the French,” the settlers’ farms, the trains and steamships, and the panorama he describes is very much like a Thomas Cole or early George Inness painting—an untroubled, idyllic young America suffused with benevolent technology. (The book is dedicated to “the people of America.”) In “late years,” the old Pine has become “much interested in the valley directly to my east,” and especially in a farm where three little girls lived with her parents. Apparently, the old Pine can talk to other trees, because he gets it through the grapevine, as it were, that the oldest daughter is named Ellen:

When the first child began to play upon the lawn, it came from the elm that stands beyond the house that her name was ELLEN. Three years more and a second child child was old enough to walk, not so winsome and agile as the first, but all the flowers and grasses of the valley agreed that she was very beautiful.

In the meantime Ellen wandered in the fields, and long distances down the road. The old Pine saw her and loved. (p. 4) It’s a remarkably creepy vision of the New England forest, with old trees spying on little girls.

The cover is an embossed depiction of Ellen standing politely, as if she is receiving instruction from an especially daunting schoolmaster. In the book she sits down—not “right down here by my trunk,” as the Pine suggests, but on a stone—and they strike up a conversation, and at first it’s not clear who is flirting with whom, or if the girl has to compete against other girls or other pine trees.

So far, so good: the book appears to be a somewhat clumsily arranged allegory of love, or a pastoral Bildungsroman. But then the pine begins to lecture Ellen, and the lectures continue for three volumes totaling 1,800 pages. The pine is interested chiefly in geometry and the wave theory of light and sound, which the pine tree opposes. Gardner was irritated by the book because it is not quite insane: the pine gives good lessons, but as a whole the book, and the premise, is more psychotic than romantic. Gardner was an enthusiastic debunker of pseudoscience, and I think he wished he could say more against Ellen, he was compelled to accept its content, because its departures from scientific and verifiable truth and logic are only evident in its outlandish length and bizarre premise.

The book also includes photographs of Vermont hills, with a model representing Ellen. (The one below is taken from the original edition.)

Apparently the author, Joseph Battell, felt that something beyond the rationalistic doctrines of his book was picturable, but it is not clear what. His book is suffused with a kind of belated New England transcendentalism, derived from Emerson, and the photographs and cover appear to be meant, at least in part, to convey the sublimity and contemplative clarity of life in Vermont. He was also sincere, I think, in imagining himself as a pine that might seduce a young woman into a Platonic relationship. 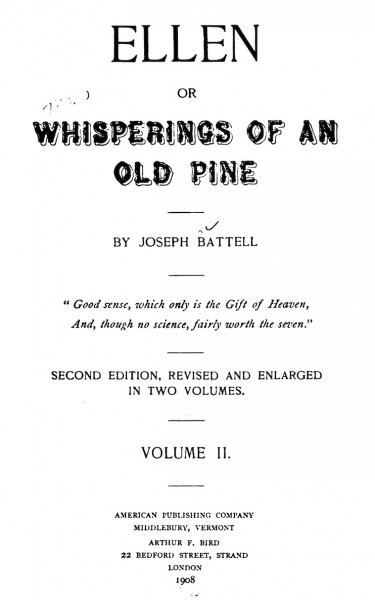 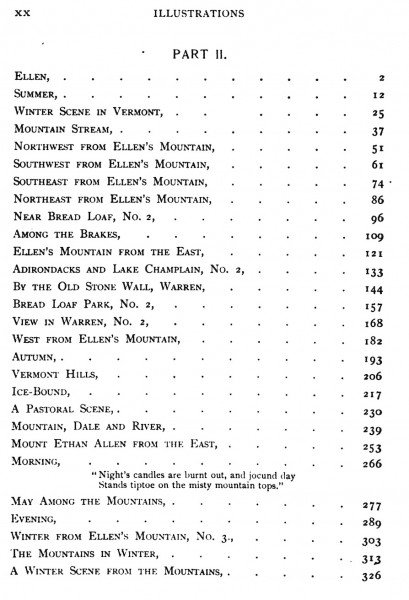 The photographs are distributed throughout the book at the beginnings of chapters, and they form an increasingly poignant contrast with the mind-numbing geometry and physics lessons the Old Pine gives the girl. 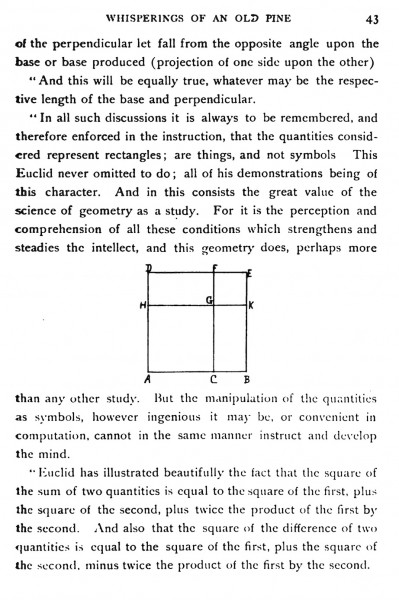 The question of sanity

After having read about 400 pages of the first of the three volumes (I wonder if anyone has read all 1,800 pages: the three volumes are very rare, and have apparently had no critical reception), I think the real threat for Battell was nothing less than insanity. The book is obviously, almost blatantly, insane: it strenuously exposits the sanity of geometry, physics, and mathematics, as if Battell were trying hard not to admit the entirely irrational premise on which the entire three volumes are based — the benevolent but sexually charged relation between the Vermont pine tree and the young woman. 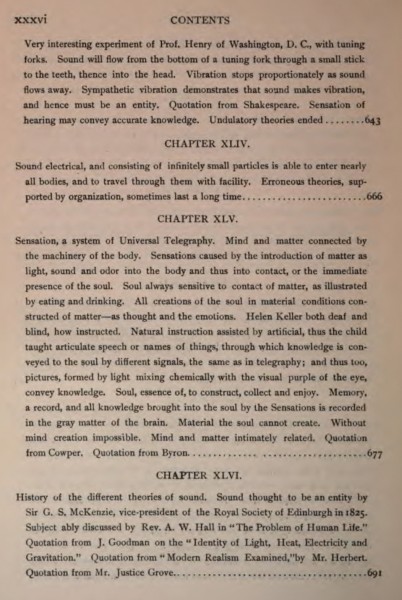 Ellen is an interesting example of a strong divergence between images and text. The insanity of the book is in effect vigorously opposed by the studied calm and bucolic tone of the cover design and the photographs—or, to say it the other way around, the book’s cover is nearly an emblem of its repressed insanity, and at the same time nearly an emblem of the calm philosophy that seems to have partly eluded its author.

I choose this as my starting point for this chapter instead of the far better known books that I will be considering next, because I want to emphasize that “writing with images” is not a continuous history leading from Symbolism to Surrealism and on to Sebald, and images themselves can behave in ways even stranger than the Surrealists imagined. Ellen is thankfully a one-of-a-kind production, but it is not unique in the way that its images reveal one part of its author’s intentions, and its prose another, and even though he sewed the two together, they pull apart, each undermining the other, until, for me, Ellen becomes unbearably disturbed. 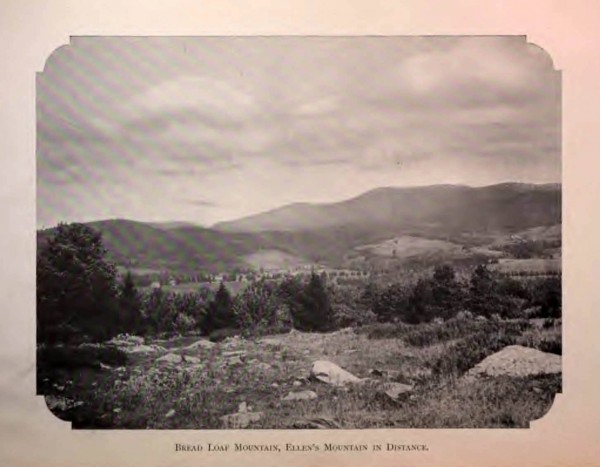 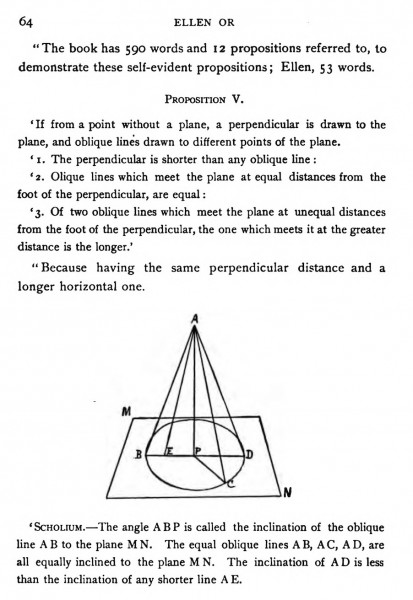 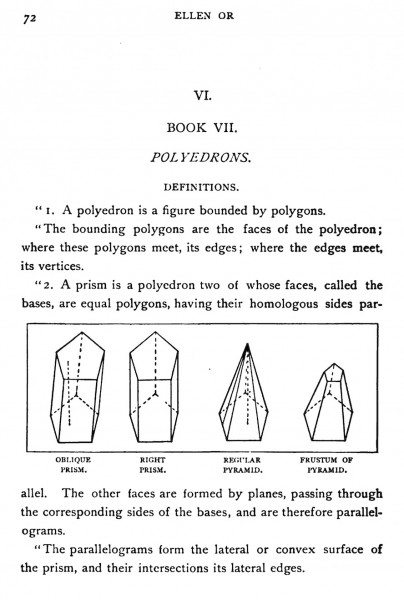 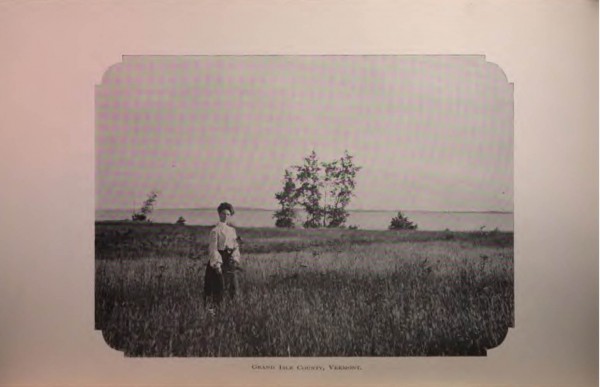 2 thoughts on “Joseph Battell’s Ellen, or the Whisperings of an Old Pine”