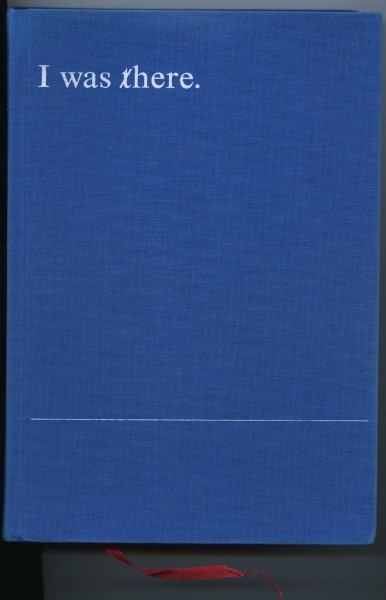 (First, a note about how to buy this book: it’s a rare book because it has no ISBN number: in fact no number of any kind. I bought it in Reykjavik in an art book store. The author, Helene Sommer, is Norwegian. I assume it could be found through Boekie Woekie in Amsterdam, or through the Lithuanian publisher’s distributor, www.mottodistribution.com. It’s a lovely book, with a blue cloth cover and a red ribbon for reading.) 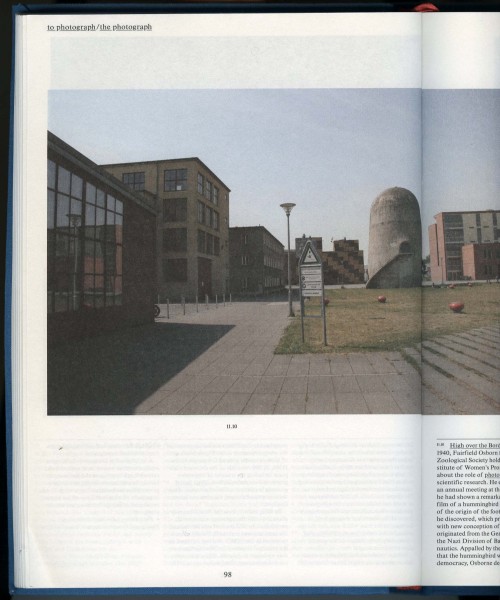 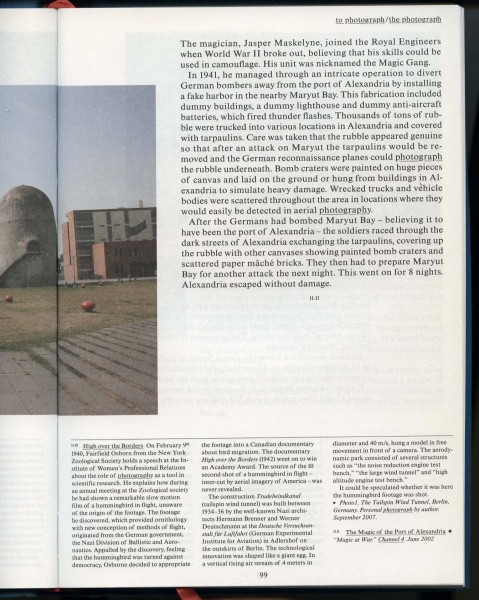 “I was there” is a brilliant piece of experimental writing. Nominally it’s an example of “unoriginal” writing in Marjorie Perloff’s sense, and it belongs in general to conceptual or experimental writing; it also has affinities with cultural dossiers from Paterson and the Arcades Project on to Kenneth Goldsmith and others. Sommer’s combination of images and texts (both treated as documents, and both “explained” by footnotes) is what first drew me to the book; in the context of this “Writing with Images” project, I am mainly interested in the benefits and drawbacks of the lack of a continuous narrative voice. More on that at the end.

The book is arranged in eighty chapters, each one titled with a word that is both a noun and a verb: “to reason/the reason,” “to attempt/the attempt,” “to rank/the rank.” Sommer calls the pairs “class-ambiguous words,” and she says she chose them to organize her project because they work on the mind in such a way that they are “dysfunctional as a classification tool.” It’s hard to know exactly what that claim means, but it is definitely true that the meanings of the verb-and-noun pairs vary so widely that they effectively do very little classifying.

In each chapter there are text excerpts and images, each one with a footnote. The texts and images are taken from “newspapers, books, magazines, TV, Internet, museums, rumors and encounters.” Some footnotes contain glosses and summaries; others are bare-bones references. Each one describes “dysfunctional and problematic systems whether in… history, science, memory, or information.”

A single example: a print of a flowering plant, a moth, and its caterpillar is reproduced without a caption. 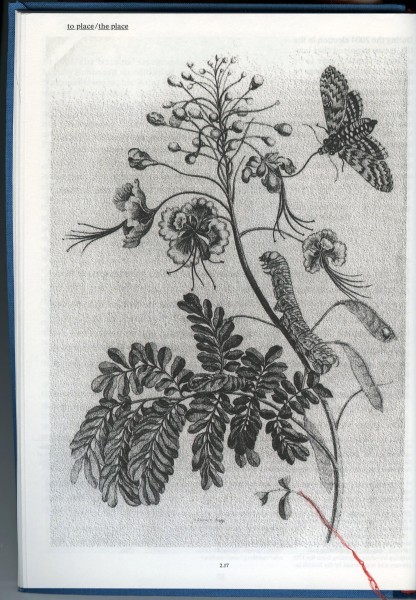 Agnotology Means Culturally Induced Ignorance
Flos Pavonis—literally Peacock Flower—is a stunning nine-foot tall plant with brilliant yellow and red blossoms. The plant was a forceful abortifacient for Awarak and African slave women who refused to bear children into inhuman bondage. During a time of colonization, when the import and export of plants and botanical knowledge was worth gold, the Peacock Flower’s abortive properties escaped its captors. Instead its ornamental use in many a European garden was emphasized. In many places in the Caribbean they still use the plant as an abortifacient.
• Schiebinger, Londa, Plant and Empire: Colonial Bioprospecting in the Atlantic World (Cambridge: Harvard University Press, 2007).

The word “places,” underlined in the original, is the reason this entry is in chapter 2, whose title is “to place/the place.”

Sommer says she organized the book “according to an automatic classification system” based on the frequency, in the texts, of these “class-ambiguous words.” It isn’t possible to tell exactly what that means: the “class-ambiguous words” don’t seem more frequent in the beginning chapters than the closing chapters, and the opening chapters aren’t longer than the closing chapters. But never mind: the salient point is that the principal of organization is “automatic,” so it is not necessary to search for meaning in the sequences. Sommer’s book tells stories of dysfunction, classified in a dysfunctional manner.

I think she expects the book to be read as a kind of Arcades Project, crippled by its own imposed dysfunctional classification system. In terms of affect it could be a disassembled set of notes for a Sebald novel. But my sense of the book doesn’t depend on the aesthetics of the dysfunctional, which I find familiar: the texts Sommer chooses have a uniform flavor of failure, sometimes surrealist, sometimes dystopian, sometimes Benjaminian. I am more interested in the experience of reading the book, and how it feels to negotiate close attention and boredom, or to distinguish the meaningful from the random. What interests me is the effect of the book’s formal structure on my reading, aside from questions of content. 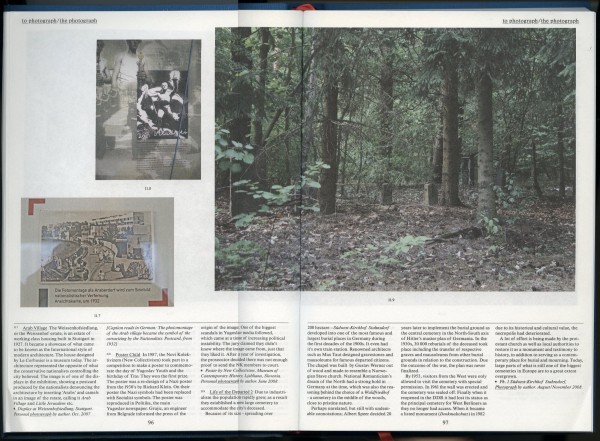 When I began reading, I was surprised to encounter entries that repeated earlier entries. At first I compared the two, in order to be sure they hadn’t varied. The texts never vary from one repetition to the next, but the images do, and the result is that sometimes the images don’t illustrate the texts. Then, belatedly, I saw that the table of contents lists the repetitions of each entry: 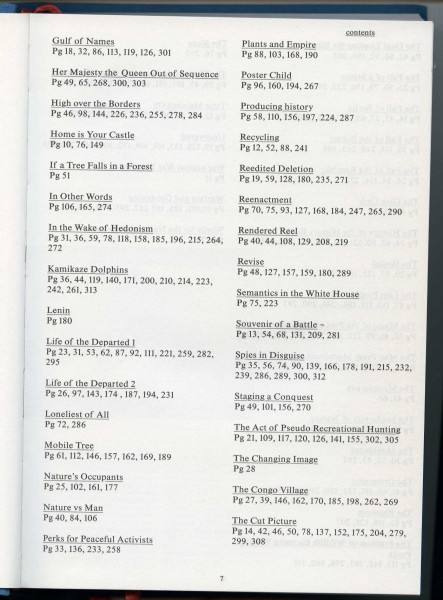 After I saw that, I mostly didn’t read entries I had seen before. As in many artist’s books, it is not necessary to read this book from front to back, but I think that is the only way to experience the many classificatory and indexical principles Sommer has brought to bear. At first, when I came across entries I’d read before, I remembered them without re-reading. Later in the book, I found I couldn’t keep them all in mind: they would look familiar, but I’d have to refresh my memory. I didn’t always do that, because it became unrewarding: I’d be reminded of the particular failure or dysfunction, but its meaning would be unaltered by its appearance in a new chapter.

As I went along, more and more entries were repeats, and so I turned the pages more quickly. At the same time, the effect of the returning stories of catastrophes, useless experiments, failed science, absurd science, and anachronistic racism started to produce a jarring effect, like the one you can experience by watching a news channel on television long enough so that the news cycle repeats, and you’re seeing the same stories in slightly different orders. As in a repeated news cycle, the reordering and recontextualization did not produce new meaning, despite the fact that the “class-ambiguous words” were different with each new appearance of a given entry. (There are exceptions, such as 26.2 and 26.3.) 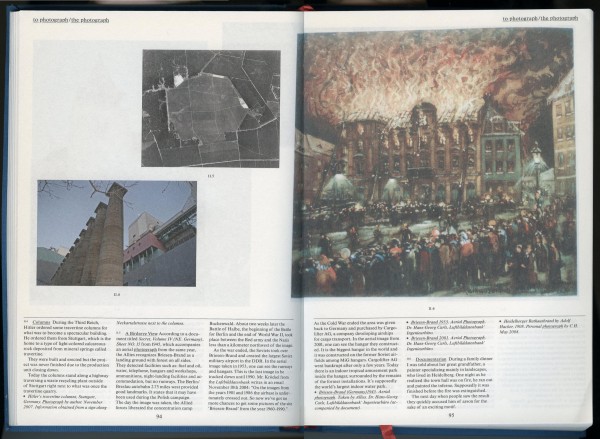 And then, on page 116, I entered a kind of free fall: on that page every entry is a repetition, and when I turned the page the entries were also repeats. I turned more and more quickly, and finally, on page 153, a new entry appeared. From that point to the end of the book there aren’t more than a half-dozen new entries, so the entire second half of the book can be read in ten minutes. Like the news-cycle effect, that change in speed is a very unusual phenomenon in reading, and both effects were captivating.

The sequence of chapters ends abruptly, and it is followed by with several pages of densely printed words that were not used to organize chapters. 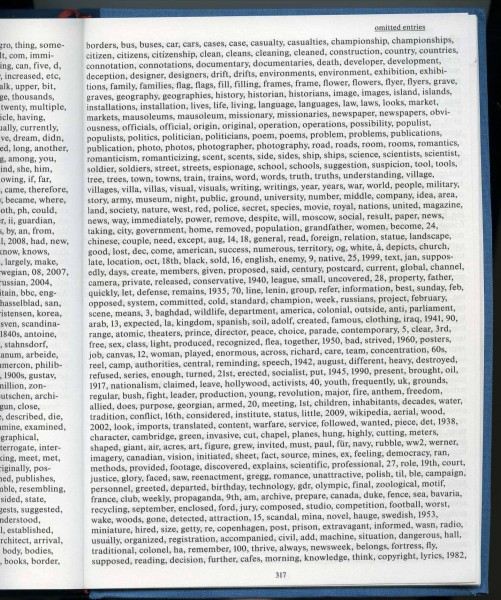 That supplement is a gesture toward a much larger book, which would presumably have the same dynamics as this one—in other words, instead of promising a greater richness, it promises a longer duration—more work for the same result—which is an unusual promise.

All these features of reading were fascinating. I loved the continued meaninglessness of the juxtapositions of the entries. Only seldom did the transition from one entry to the next carry any meaning or significance, which is the usual case in transitions and juxtapositions, but in this case meaning became unfamiliar and even distasteful.

In relation to this project, Writing with Images, I wonder what would have happened if Sommer had kept the same systematic and yet dysfunctional indexing and classification, and retained the same order of entries, but added narrative cues to prompt readers to continue reading everything from beginning to end.

What would it have been like, for example, if I had been prompted by brief notes, saying things like “This contradicts the next entry,” or “This was a useless repetition,” or “Here is 2.17 again, as a reminder of flowers,” or “I remember something from my childhood that links this to the next entry”—in other words, what if the entries had been linked, in any way, using any kind of narrator’s voice, no matter how unreliable or fragmentary? In that case the reading experience could have been sequential and enchained, if not continuous. I still might not have re-read entries I’d seen several times before, but knowing I might be asked to, or that the narrator might be variably present even in the repetitions, would produce a different kind of reading experience.

For me, such an enchainment of entries would have been more engaging. I can imagine ways proposing sequential reading, or narrative, that so that the sense of anomie, failure, and randomness would not have been compromised. The pages of surprising unexplained repetition could have been retained, and it might even have been possible to let the reader know she might skip over those pages, taking them in as a whole.

In other words: I am not convinced that narrative links—whether they are continuous, enchained, unreliable, intermittent—will weaken or distract even from the expression of hopeless randomness and failure. Even here I would have been more engaged by an attempt to keep me reading from the first entry of the multiple table or contents to the very last line of the “omitted entries,” and even past them, through the largely useless index, and on to the double-page spread that ends the book, a photo of a tourist photographing two fighting deer.