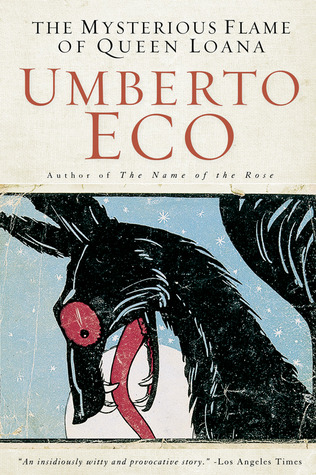 At least in the English translation this is an “illustrated novel,” presumably an allusion to the comics and graphic novels that the narrator describes (and illustrates) in the book. The use of images is hamfisted, for at least four reasons:

(A) The use of color.
Eco is lucky — and nearly unique — in that his previous sales enabled him to produce this book in full color. It’s one of just a few novels with color illustrations, and the fact that they are of good quality means that he can conjure objects of nostalgia differently than, say, Sebald. When Eco’s character finds a cocoa tin in an attic, he can show it in full color and detail, and bring it into the present in a way that an author like Sebald couldn’t (I don’t mean he would have always wanted to, but the option wasn’t available). But Eco makes very little use of this; most every object in this book is scanned, at apparently high resolution, and simply presented to us.

(B) Reproducing objects without backgrounds.
There are a few photos of three-dimensional objects in the book, but they are cropped white all around, as in catalogues. The reason for that decision isn’t acknowledged in the book; it makes them look like objects in catalogues.

(C) The effect of cropping.
All the other hundreds of illustrations are cropped tightly to the edges of the image or cover, or else they’re details. Some are arranged in rows and columns (pp. 138, 140), making them look like illustrations in a reference book. These layout and design choices are again odd, and unremarked by the narrator. Why allude to scholarly or reference works? After all, the narrator is rummaging through boxes and piles of papers in an attic — he isn’t supposed to be preparing a book for publication. In fact, Eco was preparing a book for publication, and that fact intrudes on the fiction. (One image is reproduced with its tattered margins, the way Anne Carson does; that makes it seem precious, but that isn’t remarked on either.)

(D) Image manipulation.
The final episode of the book is an hallucination: the narrator imagines himself in a drama with comic book characters. On pp. 422-45, full-page illustrations from comics are matched with facing pages of text. It’s the only time in the book where the text isn’t full page, because Eco wants to match it to the pictures. From the list of illustrations it’s apparent that Eco put these together himself from a number of different comics. They are credited as “montages by the author.” But as montages, they’re ham-fisted: characters are just pasted together, without even the adjustments that an artist like Erro makes when he does collages of comics. Many of the images have vignetting — Eco used a blur function in Photoshop or some other application, and it needs to be said — in the 21st century, when everyone has some photo-editing skills, and in the context of a novel that is all about images — that he used the blur function very badly. He could have capitalized on this, for example by saying his narrator’s mind was blurred in a simple fashion, but he apparently does not think his photo manipulation requires comment. But it does: these images are as awkwardly done as William Gass’s graphics in his novel “The Tunnel.”

I once had a chance to ask Gass about those illustrations. Why, I wanted to know, do the images all look like mid-1980s computer graphics, with thick outlines and primary colors? Because, he said, the narrator inhabits that world. I think that would have been a good answer if the narrator of “The Tunnel” had a computer, with a graphics program, and was producing images as best he could. But there is no such theme in the book. Instead the illustrations in “The Tunnel” appear the way Eco’s illustrations do in “The Mysterious Flame of Queen Loanna”: as the products of rudimentary digital skills, which appear to their makers as adequate, but which cannot appear that way to anyone who pays as much attention to images as the authors themselves ask readers to do.

[This is half the full review, which is on Goodreads.]

One thought on “Umberto Eco, The Mysterious Flame of Queen Loana”