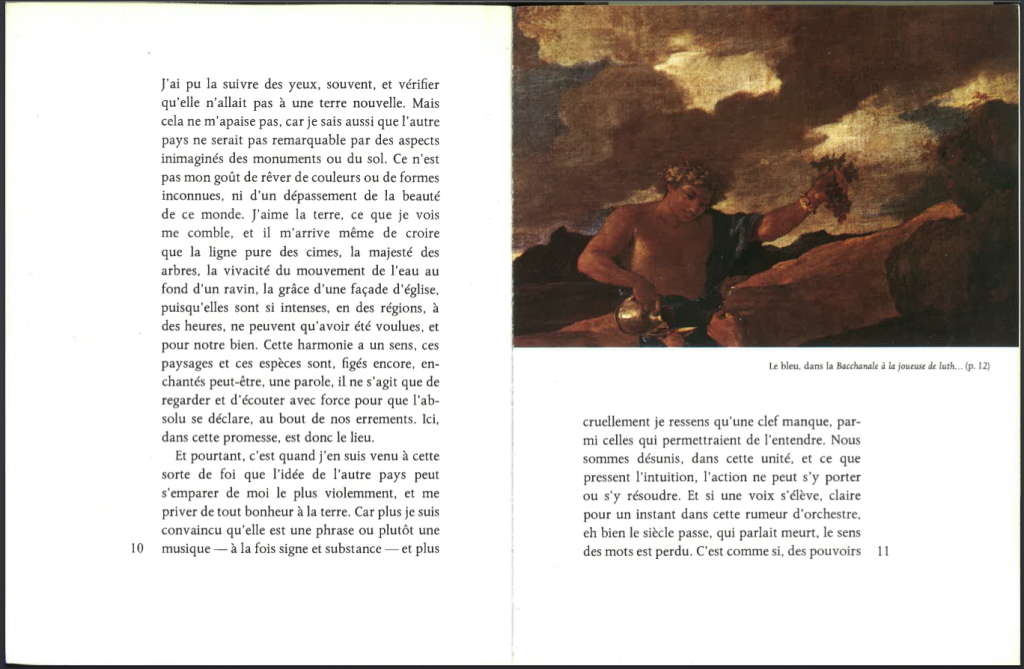 Why distinguish “novels with images,” the title of Part Two, from “experimental writing with images”? I would make the case this way: some books nominally called “novels” present themselves as something other than novels. Unlike, say, a novel by Jane Austen, such books enact or display their nature as novels. By this I mean something wider than what is normally called metafiction: such self-presentation isn’t only a matter of references, in the book, to the book, or by the author, to the writer. When Bonnefoy writes, in l’Arrière pays, that his is “a book in which reason would finish by circumventing dream” (“Un livre où la raison finirait par circonvenir le rêve,” pp. 84, 83), that’s a good example of metafiction, and it is certainly “experimental” in the sense I intend. When he says, in the Introduction to the English edition, that the book is “hybrid and unclassifiable,” and might be “poetry or prose” (p. viii), he is enacting a gesture that has become commonplace since Barthes: his book declares it is unsure about what genre it exemplifies. Bonnefoy’s first attempt to write about his experiences, he says, ended up in a “conflagration,” in which the imaginative world he had tried to construct burned to the ground, “leaving nothing but one or two fraught sentences”; p. 91 in both editions. Gestures like those are not metafictional, because they take place in a separate Introduction, but they are postmodern in the usual sense of that word: they register awareness that the book does not belong to any of a number of established genres, types, manners, modes, or styles.

Declarations like Bonnefoy’s are part of what I am after, but the word “postmodern” is at once too constrictive, because it has overtones of a movement that came and went with authors like Jean-Francois Lyotard and Fredric Jameson, and too vague, because it suggests affinities with the art movement that began in the 1960s and may or may not have ended. A more useful sense of “experimental” comes from Patrick Durgin, in an essay called “Post-Language Poetries and Post-Ableist Poetics” (Journal of Modern Literature 32 no. 2). Durgin doesn’t take “experimental” as a term to be defined, as many writers do; instead he presents it as a consequence of another interest. In modernist poetics, he says, “the compositional process continues with every act of reading… In so extending the creative labor to hermeneutic or critical labor, radical modernist poetics has embraced ‘experimental’ approaches.” The most interesting of these, for Durgin, are those that entail an “inclusive sense of witness,” so that reader and writer are “merged,” and “and texts become sites for both contesting and forging new subjectivities.” “Experimental,” from this perspective, means “poetics of radical interdependence” between reader and author, “a conscious congruence between aims and means rooted in experiential and simultaneous events”(pp. 161, 169). I am not following Durgin’s interest in disability studies and “post-ableist” poetics, except where he notes that their concerns can become general conditions of reading. What counts as “experimental” in this sense is the kind of encounter between reader and writer, and a will to “transform the ‘intelligence’ that is so often mired” in what William Carlos Williams called “simulations of present experience to the facts of the imagination.” (Williams, Spring and All, 1929, in Durgin, p. 161.)

Some books are experimental in this sense only in regard to their writing, and others can be entirely conventional in narrative terms but do interesting things with images. An example of the former is John Berger and Anne Michaels’s Railtracks, which is experimental in its prose, but indifferent in its interpolated photographs of blurred views from trains. The splintered, at times lovely conversation between “J” and “A” in the book has little to do with Tereza Stehliková’s color photographs of wintry landscapes: the images are neither coordinated with the text nor contrasted against it. Perhaps it would have been better to have photographs of the originating event, a walk through King’s Cross. (I do not think that Alexander Kluge and Gerhard Richter’s collaboration December has the same imbalance, even though it’s also a book with a narrative and wintry photographs.) An example of the latter is Wright Morris’s Plains Song: a book with a conventional narrative but an arresting pictorial strategy, in which one photograph recurs chapter after chapter.