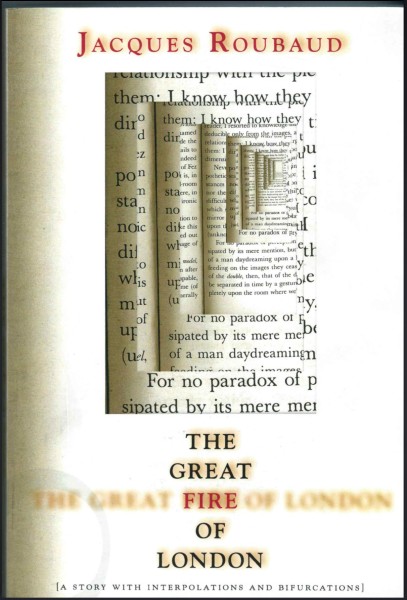 The Great Fire of London is an intricate book, a kind of “multidivergent,” elaborately cross-referenced, multiply layered magnum opus in the Oulipo tradition. It makes Georges Perec’s Life: A User’s Manual (which it addresses) seem like a simple rule-bound novel by comparison. Dominic Di Bernardi, the translator, compares The Great Fire of London to proto-hypertextual books such as Milorad Pavic’s Dictionary of the Khazars, Julio Cortázar’s Hopscotch, and Michel Butor’s Boomerang, all works of the late 1970s and 1980s. The Great Fire of London comes near the end of that sequence, in 1989. (It was translated in 1991 and published by the Dalkey Archive.) The book’s title page is a fair warning of the narrative structure: 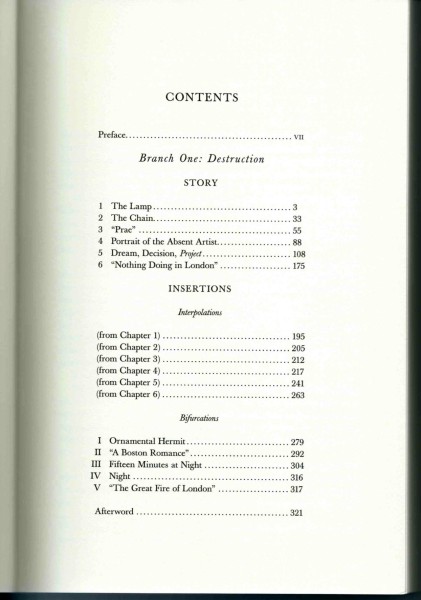 Here the entire book “itself” is listed as “Branch One: Destruction.” The narrative itself is the “STORY,” and it is followed by “INSERTIONS,” themselves divided into “Interpolations” and “Bifurcations.” The entire Great Fire of London is in numbered sections, which Roubaud calls “paragraphs.”

The book’s historical moment and its elaborate structure of reference only concern me indirectly: I am interested in the book’s two illustrations. Their significance in relation to the book’s structure becomes clear when a reader notices that one picture is on the half-title page “STORY,” and the other is on the second half-title page, “INSERTIONS.” (The two titles almost act, on those pages, as titles for the photographs.)

The only thing readers see before they encounter this image is Roubaud’s two-page “Preface,” and the caption refers them to one of the book’s numbered “paragraphs” (sections) that is five pages into the “STORY.” It’s the image’s caption that first introduces the “tree” or “branching” narrative of the book. 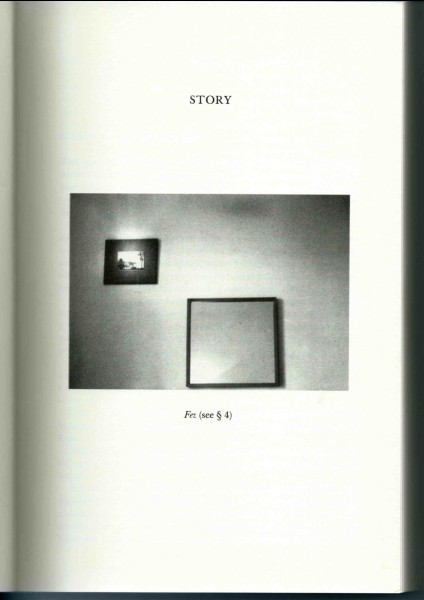 If I go directly to §4 as the caption directs, I can’t entirely understand what I’m reading, because the text describes the image as “the double photograph of Fez”; it turns out, reading back into §3, that this is one of two photographs Roubaud says he has with him while he writes. Section 2 describes how he used to write in the dark, and stop at dawn. Section 3 mentions the photograph, and gives a basic ekphrasis: it’s a photo of a mirror, reflecting lamp light on a wall; and at the upper left there is a picture of the city of Fez, and outside a window, invisible in the photo, was a similar view of Fez. Later in §3 Roubaud says he has two photographs, pasted facing one another in a notebook; the other was “dark.” For him, they represent the passing of time during the period before dawn.

So even in the first ten minutes reading this book, it’s clear that this image, and its companion that is not illustrated, is a kind of emblem, token, or companion to the act of writing. Because it’s on a half-title page, it’s also like a frontispiece, and it has a frontispiece’s function of emblematizing the book’s contents.

Roubaud says that “the double photograph of Fez will act as an example and model, and at the same time as a memory and a prop: a model of something to the same degree, at least, as the uncertain memory of itself, vanishing, that I would like to ‘capture’ in prose.” (§4).

There are four metaphors here (example, model, memory, prop) organized into two groups (example and model, memory and prop). It turns out that the entire Great Fire of London is a meditation on the loss of Roubaud’s partner Alix, who was a photographer. As that theme develops, the second group of meanings also becomes more intense and clear: this photograph—like the second photograph that bookends this one after the “STORY”—is a memento or a mnemonic of a time he was in Morocco with Alix.

I think the first group of metaphors is more interesting: the “double photograph” is also “an example and model.” I haven’t checked the original French, but in English there is a potentially large difference between “example” and “model.” I can’t read the word “example,” as it is used here, except as a near-synonym for “exemplary”; but I can understand the image as a model. Roubaud treats this rather indifferent photograph to an elaborate ekphrasis, mentioning the shadows cast by both frames, the uneven composition, and the variable light on the walls. The ekphrasis makes it possible to imagine the photograph as a model of structures in the text—it is self-referential, multiply-layered, and abstract. The book is about crossing references, frames of reference, occluded perspectives, and structural relations, and so is the image.

Roubaud returns to this photograph and others that he doesn’t reproduce, and there are also typographic echoes, such as this rectangular concrete poem that repeats the photograph’s imagery and its rectangular format: 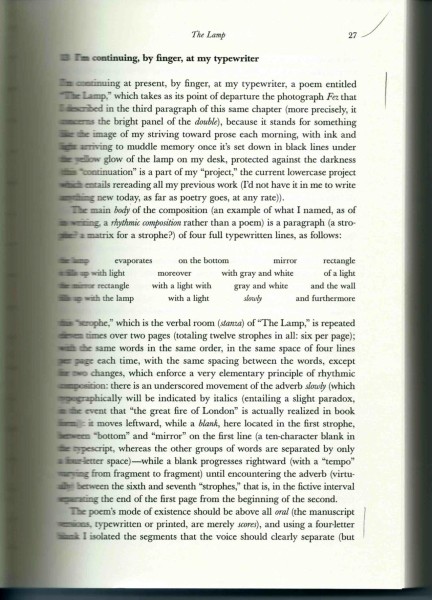 Aside from these reminders and echoes, however, the picture’s visible details recede as the book goes on; there are almost 200 very full pages between “Fez” and the book’s only other photograph. As I read, and the physical and temporal distance from the image increased, and its details were replaced in my mind by its two functions as a structural model and a mnemonic aid.

This is an interesting example of how non-visual a visual object can become: Roubaud assigns it two roles (structural and mnemonic); in order for the image to work as a structural model, I need only remember it is a blank wall with a blank mirror and a picture of a town that would have been visible outside the room’s window. For the second function I need only remember that it was taken by Roubaud’s partner, who has since died. I don’t need to turn back to the image, and in fact I don’t need to have seen it at all.

When The Great Fire of London’s “STORY” finishes—although by that time a reader will also have checked and read many cross-referenced sections in the “INSERTIONS” half of the book—the second photograph appears. 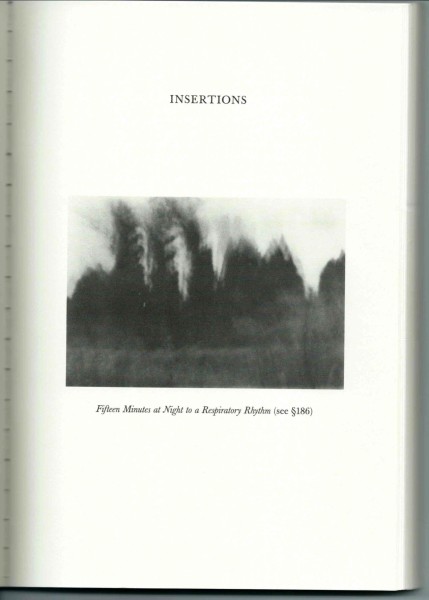 The caption here refers the reader to the very end of the book, to §186, ten sections from the end. Again the caption itself doesn’t work to direct a reader, because if a reader turned from this page to §186, it would to be necessary to read back a little, starting at §182, in a section headed “Fifteen Minutes of Night.” (These apparently inaccurate references in the captions are unclear to me: if Roubaud had a purpose in pointing to §186 here or §4 before, it isn’t obvious.)

In this case the story is poignant, all on the side of memory and not structure, example, or model. This photograph was actually taken at night: it is a time exposure, made by Alix by holding the camera to “her bare-skinned chest” (§185) for fifteen minutes. The starry sky blurred and whitened as if it were day. Roubaud compares the motion in the picture to breathing: “That’s why this photograph is as much a photograph of her breath as of the cypresses… this photograph is an unhappy and impassioned homage to respiration, breath, which its author, an asthmatic from birth (a condition that would eventually kill her), found and inscribed inside the picture-image…” (§186)

There are a number of these parenthetical revelations: Roubaud likes to put the most painful, personal things in parenthetical asides. (In this case 309 pages into the book!) Here, the photograph’s blur is inescapably a model of memory, and the photograph inevitably recalls the text’s elaborate attempts to classify and control memory, but that is not how Roubaud presents the photograph. He says it is “an image of love and unhappiness,” like a token or mnemonic, but not as a structural model (§ 186).

This book has one of the most interesting examples of an image (the first one) that fades in the reader’s memory—it’s almost the only visual thing in the book—but becomes even stronger, because of that fading, as a model of the book’s structure. (I revisit this in the theory chapter.) The other meanings of the image—its function as a reminder of the author’s past, “the uncertain memory of itself, vanishing,” is intensified with the appearance of the second image. But by that time the book itself, the “STORY,” is finished.

This arrangement—a book bracketed by just two images—is unique, I think, in the history of writing with images. Neither photo is especially interesting visually, and both are minor counterpoints to the edifice of The Great Fire of London. But the first is an emblem of the book’s structure and its enabling moments (the author’s pre-dawn writing ritual), and the second is an emblem of the loss that drives the entire narrative. The two make me wonder what could be done with a long novel and two more interesting photographs.